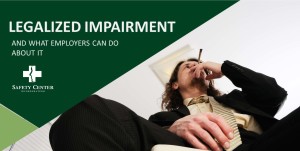 Topic: Legalized Impairment (as a direct result of marijuana use) and what employers can do about it

On Thursday August 6 at 8:30am, Safety Center hosted its monthly Safety Forum on the topic of “Legalized Impairment” to address the potential legalization of recreational marijuana in the state of California, and how it could affect safety in the workplace.  During this month’s forum, Safety Center’s own Jerry Bach led an informational presentation with Jeff Hastings (CEO/President of ARCpoint Labs) on this timely and controversial topic.  27 safety professionals participated in a lively discussion regarding the rights of employers to implement and maintain a drug-free workplace.

The presentation summary is as follows:

What Can Employers Do?

Bottom line: Impairment (legalized or not) is unsafe for the workplace

For more information on this topic, here‘s a past presentation designed by Jeff Hastings with additional resources.

Join us in September for our next Safety Forum with the topic Workplace Violence (Thursday, September 6 at 8:30am)