Jordan McNair was a 19-year-old football player for the University of Maryland who passed away from heat stroke on June 13. The student-athlete succumbed from the events that occurred during a May 29 team-organized conditioning test.

The first of two external investigations was released revealing numerous shortcomings in the following University’s procedures. You can read ESPN’s article here that summarizes findings of the investigation from Walters Inc.

Despite his status as being a student-athlete, occupational safety and health professionals can learn and identify several issues with the events that led to Jordan’s death. The news also comes at a time when federal OSHA is being pressured, by petitions and unions, to create a heat illness standard for one the most cited hazards in California, GISO 3395. What exactly went wrong:

1. Proper emergency response procedures were not followed or implemented properly.

Jordan was not taken to the hospital by emergency services until an hour and 39 minutes after the onset of symptoms. According to the report coaches interfered with proper medical procedures. According to the report and ESPN, “McNair was walked around the field for 34 minutes after becoming symptomatic.” When he was finally taken off the field, it was only possible with the assistance of two athletic training interns who struggled to keep him standing. The report states that injury evaluation “did not include any assessment or documentation of vital signs including core temperature.”

A change in the practice facility, due to construction, caused two issues. First, cold whirlpools or baths were not readily available (on the field) at the temporary site of Cole Field House, although they are part of usual setups. This played a role in his death because by the time Jordan was taken off the field, cooling methods, such as ice packs or towels, were no longer effective for lowering his body temperature. Baths were available on-site, despite not being on the field, but their location was unclear. Wes Robinson, the head athletic trainer, was concerned with transporting the larger Jordan with the help of two, smaller student trainers. Wes feared that the use of the bath could lead to drowning due to the seizures Jordan was experiencing.

The second issue was an inability to provide accurate directions to the emergency response services and no one met the ambulance as it arrived. It took 32 minutes for emergency services to respond and prepare him to go to the hospital according to the report. Some of that time was the result of the ambulance going to an upper parking lot instead of the field. In the University’s plan, a representative is, also, supposed to meet the ambulance, but that was not followed; delaying time before transportation to the hospital.

2. Jordan was not Acclimated.

One of the most important factors not revealed in ESPN’s article, although some language suggests it, is that the May 29 conditioning practice was Jordan’s first team-activity in over a month. The Baltimore Sun released the information based on logs from the University that are required by the NCAA. The logs revealed that the deceased had not participated in team-organized workouts for 33 days prior.

Even at a seemingly comfortable 80 degrees, a temperature high enough to mandate heat illness procedures in California, a lack of acclimatization potentially played a key role in Jordan’s death. Those who are skeptical of acclimatization’s role in heat illness don’t need to look any farther than fatalities in California. See the chart below that presents a damning correlation between days on the job and the 25 occupational heat-related fatalities investigated by Cal/OSHA in a single calendar year. 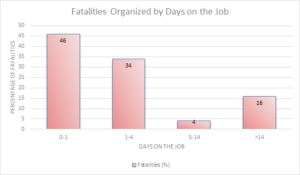 For anyone in safety and health, safety culture is brought up frequently. Somewhat different from other responsibilities, it was more to do with social make-up and interactions than physical, biological, or chemical ones. I’ll warn you that this section is a little less objective than the previous two. When we talk about poor safety and health culture, what are we referring to?

We are referring to an environment based on fear and intimidation supported by administrative staff, an administrative/ coaching staff that ignore the recommendations of licensed physicians and the people that push the “no quit”  and too vulgar for Safety Center to want to share mentality that contributed to Jordan’s death and others like him.

By now, I’ve likely lost a few readers because that mentality is one that is comparable to those in many blue-collar occupations we work with. Culture impacts not only how administrative staff operates, but every employee that works with them (maybe too obvious here). Poor environments, like the one at the University of Maryland’s football program, are contagious.

It is our responsibility to stop them from spreading.

The investigation of the incident, by Walters Incorporated that led to Jordan McNair’s death has painted an ugly picture of the football program at the University of Maryland. More so, it reveals the deficiencies and provides a learning opportunity for us in the occupational safety and health field. Lessons like these come at a steep price. Don’t waste them.